When my kids were REALLY young, I stumbled upon a live theatrical performances for children put on by THE PAPER BAG PLAYERS.  The non-profit theatre troupe is still performing and still just as popular with kids today. Based in the greater New York City area, their motto is “Every kid WILL see a show, regardless of ability to pay.” 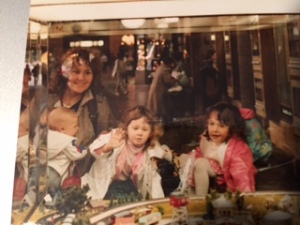 Have Babies, Will Travel: Always Ready For Fun!

A friend who was in the same boat as me — two kids my kids’ age and a high pressure part time job — told me about the show one morning and we packed up the kids and went to the historic Tarrytown Music Hall in NY.  My friend looked a bit dubious when she saw that I had brought Bennett. “Do you think a seven-month-old will behave long enough to sit through a show?” she said.

“He loves the theatre!” I replied.

The main floor was already jammed with children. We hurried up to the balcony and grabbed some good front row seats, just in the nick of time – the school groups started coming in and the noise level was just amazing. “No one will ever hear Bennett even if he cries the whole time,” I thought to myself with relief.

The show was captivating! Even I could not believe it – baby Bennett paid attention the entire hour! It was great. There was a lot of singing and interaction with the audience.The tunes were catchy. I still remember a participation song “If you can STAMP // if you can JUMP //  if you’ve ever going BUM-PITY BUMP // then you can do the Paper Bag RAG.” I can still see my girls jumping and singing and Bennett, in my arms, jumping along with us.

We were hooked! I made a promise to myself to take the kids to The Paper Bag Players’ show every year — and we went! I think my kids still sing the Polar Bear song when they babysit: “Polar Bear, Polar Bear // No bear tougher anywhere!” 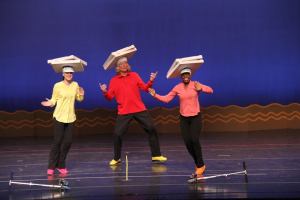 There were so many memorable tunes created by Donald Auswander, who created the musical score during the era that we saw the shows, from 1989 until about 2003, White haired and white shirted Donald comically walked in and sat down at the piano to open the show. The other Players were usually four young actors, each sporting a different color shirt, with brightly colored shoes.

But one year, one  of the four actors was an older woman named Judy. It turns out she was Judith Martin, one of the founders of the troupe. One skit she performed repeatedly comes to my mind – even though when I first saw it, I did not really like it. Judy came out to a stage with just a big plain long brown sheet of paper hanging on a clothes line. An off-stage voice announced: There Once Was A Woman Who Thought About The Warm Golden Sun, and Judy drew a big yellow sun on the paper. She Thought About Some Pretty Flowers, the announcer continued, and Judy drew some flowers on the paper on the clothesline. Several other thoughts were announced as Judy drew pictures, until she reached the end of the paper. The voice said “And She Took These Memories And Wrapped Them Around Her And She Smiled.” Judy unpinned the paper from the clothesline, smiled, held it close to her heart, and spun around, twirling and wrapping herself in the paper. Wearing the paper and a big smile,she walked off stage.

“What the heck was that?” I muttered to myself. What a strange skit for children.

But now I get it!

My daughter Alicia asked me this week how it felt to be a grandmother. Well, first of all: wierd! I mentally feel about 32 years old! How can I possible be a grandmother? But most importantly, it feels great! Even though in my mind I still have young active kids who swarm around filling the house with joy, laughter and a lot of stress, I realize that grandchildren, just as everyon says, fill the house with love and chaos, and then go home so you can relax. It is a great time of life. I look forward to parenting a parent, and grandparenting many grandchildren to come. I am striving for just the right touch – to be available with help when needed, but not foisting my “help” on the parents when they don’t ask/need it!

I think about my kids, the joy each one brought me and all the fun that we had. And I take my memories, wrap them warmly around me and smile! 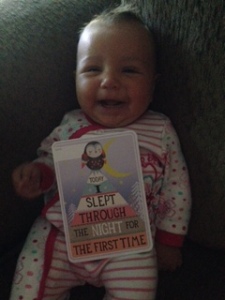 Her parents are laughing too!

Warmed by memories, I look forward to the fun ahead. I can’t wait to take my new granddaughter Eliza to The Paper Bag Players! Maybe she will be ready in four months, like her uncle. She is already laughing.