Are times changing? On the topic of climate change, the Pope says yes. Department of Defense (DoD) says yes. Insurance companies say yes. And Congress says no. Whether from an anti-science bias or pro-money desire to placate fossil fuel industry contributors, members of Congress will not be getting priority boarding on NOAA’s ark. 98% of scientists say that climate change is a fact and that carbon emissions from human activity contribute to this worldwide challenge.

We don’t expect to get in an accident or experience a fire, but we have insurance. It seems the prudent approach after assessing risks. Most states require automobile insurance in order to register and operate a car. Likewise, cautiousness seems the wise approach to climate change. There is 2% chance that the violent weather patterns are part of a natural cycle, but we must still deal with disaster recovery after weather disturbances. Resilience requires anticipating and preparing.

When we lived in Tampa from 2004-2006, there were times that ambulances couldn’t reach Tampa General Hospital on Davis Island, because waves washing over the bridge made travel too risky. The active hurricane seasons increased injuries at the same time that patient transport became more treacherous or impossible. When people think of storms, they think of collapsed roofs and flooded houses, but there is the human toll: the 2 year old who wandered into a damaged pool, survived near drowning but with profound deficits; the neurosurgeon who fell off his roof during hurricane cleanup and died from brain trauma. Hurricane Katrina and its impacts.  NASA and NOAA ( National Oceanic and Atmospheric Administration) claim that 2014 was the hottest year on record. June 2015 rainfall in D.C. totaled 11.93″ – the 2nd greatest amount on record for the month since 1871. While these extreme weather episodes could be coincidental, sensible people pay attention and take precautions. Can you add your own story of wacky weather?

With the release of the encyclical, Laudato si’ (“Be praised” or “Praise be to you”), Pope Francis tackles the human contribution to climate change and chastises us for acts of violence against the earth. “Human ecology is inseparable from the notion of the common good.” (156) He proposes that we can rise above self-interest and rescue the planet. Yes, the verb used is “rescue” from our present ecological crisis (15). Whether you consider yourself religious or not, you are an earth resident and thus, the target audience of Laudato si’. We have been violent towards the earth, deliberately or unconsciously. Are we willing to change course and save ourselves?

The encyclical’s thesis is, “Climate change is a global problem with serious implications, environmental, social, economic, political and for the distribution of goods; it represents one of the principal challenges facing humanity in our day” (25). Earth is our common home and everything in the world is connected. The human roots to the ecological crisis have caused declines in the quality of human life and will ultimately lead to the breakdown of society. The issue isn’t just far away in distance or time. During the last few years, we have experienced drought, floods, record snowfall and other extreme storms in the US. With rising sea levels, submerged islands will create climate refugees in search of habitation with access to food and drinkable water. If our actions have put others at risk, are we willing to offer these immigrants a home in our country? 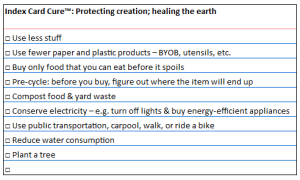 How can we avoid self-destructing? What kind of world will we leave to those who come after? Addressing the crisis requires profound changes, including international and local policies, environmental education, and personal actions. Reshaping habits and behavior is difficult, but we must institute protective measures to reduce our vulnerability and limit the impacts of climate change. We have a vested interest. Our lives, and not just lifestyles, depend on taking action. The good thing is that we can start right now to change and to heal the earth. The boat won’t wait.