They prevailed. For the first time in Army history, women have completed Ranger School and earned the Ranger tab. Two women graduates of the United States Military Academy, Captain Kristen Griest and First Lieutenant Shaye Haver, graduated last week, joining the ranks of thousands of male Rangers but marking the first time that women have even had the opportunity to attempt the rigorous course.

The appropriately-named Victory Pond on Fort Benning was site for an extended celebration of well-wishers that included 75 West Point women graduates attending from as far away as Germany in a show of pride and solidarity. The night before the Rangers graduated, women from the West Point class of 1980 presented engraved silver dog-tags to CPT Griest and LT Haver, linking the first women West Point graduates to Friday’s historic moment. The gift for the new Rangers also included a letter, modeled on the congratulatory note from the USMA Class of 1939 to the Class of ’80 women. Perhaps more than any other event since women graduated from West Point 35 years ago, the success of Griest and Haver has coalesced the West Point Sisterhood.

Ranger School may not be an experience that I want for myself, but I want the opportunity available for all who qualify, regardless of gender. If my granddaughters one day earned the Ranger tab, I would cheer their achievement just like I respect the two West Point women for their fortitude and endurance. The impact of this accomplishment extends to all. Gender is a false barrier and insufficient reason for limiting opportunities.

Eleanor Roosevelt receives credit for saying, “Do one thing every day that scares you.” Earning the Ranger tab took these women 123 days of toiling in the mountains, slogging through swamps and battling exhaustion, fear and hunger; not to mention time spent preparing physically and mentally as they anticipated the demands of the course. A third woman is still immersed in the mountain phase and on target to complete the course next month. Maj. Jim Hathaway, from the brigade overseeing Ranger School, addressed critics who castigated the Army’s willingness to allow women Ranger students. And now that two women have earned their tabs, critics claim lowered standards. Some people will never give the women credit, despite evidence to the contrary.

No matter what we at Ranger School say, the non-believers will still be non-believers. Nothing we say will change your opinion. I and the rest of our cadre are proud of the conduct of our soldiers… They took the mission assigned and performed to the Ranger Standard. Rangers Lead the Way

Griest and Haver now wear Ranger tabs but Army regulations still prohibit women from assignment to Armor, Infantry and Special Operations branches. This may change in January 2016 when all positions in the Army must become open to women. 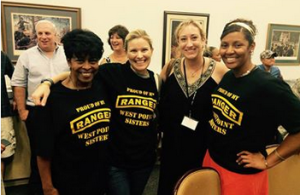 CPT Griest and First Lieutenant Haver, we salute you.