Bicycles and I have a long history. While growing up in the Bronx, riding usually meant heading to the protected trails of Van Cortland Park or the 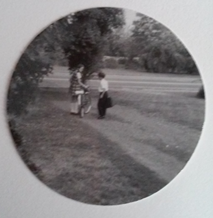 Bronx Zoo. But since my mother didn’t drive, we navigated city sidewalks before reaching park paths. Before migrating to the NJ suburbs, my tricycle was exchanged for a two wheeler. My brother and I picked up bikes at a shop several blocks from our Mosholu Parkway apartment, adult-sized ones, with the expectation that we would ride the bikes home. Luckily, the step-through frame allowed a second-grader to ride a full-sized bike, but it was not unlike getting thrown into the deep end of a pool and being expected to swim.

That blue bike stood me in good stead until West Point. Being on the

cycling team had a singular advantage—we were able to ride off-post without getting special permission. What a thrill, although the hills in the Hudson Highlands made us earn that privilege. Fall bike rides with stops at roadside stands for apple cider and pomegranates are a source of fond memories amid four years of granite-hued experiences.

Assignments in Germany exposed me to a country that had planned for multi-modal accessibility. And what exactly does that mean? In figuring out how to get people where they needed and wanted to go, Germany broadened the scope beyond cars. The integrated transportation network offered different options depending on the distance to travel. Use trains for a long haul; then connect to streetcars or buses for intermediate jaunts bringing travelers relatively close to their final destination. Many people opted for transit. Despite well-known German automotive companies and the famed autobahn system, driver licensing requirements were stringent and cars were exclusive because operating costs were prohibitively expensive. 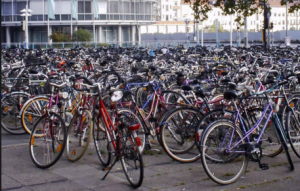 Train stations with seemingly thousands of bikes parked outside were a usual sight but still remarkable, as was seeing a commuting parent with two children in bike seats and a stroller strapped to the rear rack or more impressively, watching a German man riding a bike one morning, holding a beer and a cigarette or the elderly woman heading to the grocery store with cane and shopping bag hanging from handlebars. That’s just how people got around. Germany designed its transportation system to encourage access for non-motorized vehicles. Biking trails were maintained and plowed when needed. Paths connected neighborhoods through forest or farm field, which allowed our son to ride by himself from our Sandhausen house to his middle school at Patrick Henry Village, without  crossing high-speed hazards.

Until I broke my back, ankle and was paralyzed, I never gave the idea of mobility much thought beyond getting from point A to B without getting lost. Beyond the physical effect of the injuries and resulting end of my Army career, the accident changed me in ways not visible. During long nights in the hospital, I pondered the transition from running marathons to getting log-rolled for bedsore prevention and how sitting up to eat required a dizzying expenditure of energy. Multiple surgeries and casts altered both balance and outlook. We tend to take many things for granted, like being able to move and get around. In pre-ADA (Americans with Disabilities Act) days, the assumption was that no one was hampered by disability or in need of accommodations, a fallacy that is mostly corrected now.

Recent articles in the Washington Post reported on bike/car/parking tensions.  A minister, opposed bike lanes which would take away Sunday parking spaces for parishioners, explained, “We have to protect what’s ours.” DC is planning to implement increased meter fees when demand for street parking is high, a change that has motorists fuming. Who owns the streets and what is the responsibility of government to provide safe options rather than defaulting to cars?  When I attended Bicycle Pedestrian Advisory Committee meetings in Tampa, the city expressed clear priority for walking and biking  over motorized options. On a recent visit, Tampa seems to be realizing that vision but not in the same category as my current hometown, Arlington, VA, with its extensive network of bike-friendly streets and trails.

Three decades have passed since my parachute accident and I still ride a bike, a goal that once fueled my recovery when I didn’t know whether walking was in my future. We need to balance transportation design and carbon taxation to optimize options for mobility and accessibility. I see bikes as a great equalizer. They expand the range a person can travel at an economical cost. Teaching children to ride bikes, as one DC school is doing, is an invaluable life skill. While I don’t remember learning to ride, for as long as I can remember, bikes have aided my mobility. From here to eternity, I hope to continue to bike.