I had so much family fun on Valentine’s Weekend. ( I’m not sure that “Valentine’s weekend” really is a thing.) The Collen Clan gathered in full force ostensibly to celebrate some birthdays but in reality to see the baby and marvel at her physical and cognitive growth.

A nine month old is an amazing amusement– many adults gawked and marveled at Eliza. We enjoyed each other and wonderful winter fun in the frigid weather. Cross country skiing and snowshoeing were the popular activities.

Everybody knows Valentine’s Day became the traditional day for expressing romantic love thanks to the Catholic Church and Saint Valentine who was martyred on February 14th in 278 AD*, right? Or maybe it was 348. Other versions list the beheading as 677. Actually there seems to have been 3 martyrs who all had the name Valentinus. All of the Valentines helped people during persecutions.The first Valentine was a priest put to death for helping lovers. Roman Emperor Claudius the Cruel outlawed marriage so that men would happily become soldiers, but Valentine secretly performed marriages anyway. A Pope in around the year 800 declared it a “Holy Day” (condensed to holiday) to put Christian overtones on the Roman pagan love festival of Lupercalia. All the Valentines supposedly left notes for the daughter of their jailer signed “From Your Valentine.” And so it began.

For me, the weekend was a million examples of love: romantic, maternal, sibling, parental, love of outdoors and winter sports. Armed with warm coats and wonderful wool socks we embraced it all. 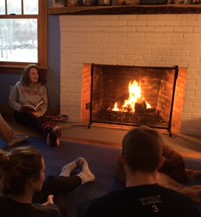 “How the faces of love change, turing the pages . . .” Fleetwood Mac

And when our noses were getting frostbite, we stomped off the snow and warmed up by the fire.

Our fun spilled over to preparing a big raucous dinner with lots of laughter.

During my fireside reading an article in National Geographic entitled A Kiss is not just a kiss, caught my eye. According to a study by the Kinsey Institute at Indiana University, the human race does not universally use a kiss as a sign of affection, even today. Just like humor, showing affection is cultural. Some cultures will never warm up to exchanging germs in a lip lock (talk about a romantic description of a kiss!) Only 46 % of the 168 cultures studied kissed as a form of emotional exchange. The author of the study hypothesizes that the popularity of kissing is linked to the “rise of leisure”. I guess if we didn’t have time to sit around and smooch we would still be shaking hands, or just ducking our heads and avoiding looking at each other the way they exchange affection on Downton Abbey.

Americans are still in love with being in love. 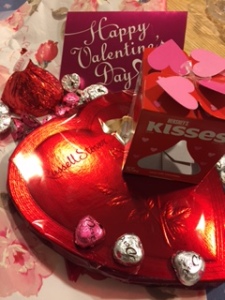 Valentine’s Day helps bring this obsession to the foreground. Thank goodness it is politically correct to expand the concept into expressing love and thanks for all relationships. But the truth of the concluding quote reported by the National Geographic author Eve Conant still has me laughing. “. . .people do seem to like kissing once they discover it.”

*I know AD means ‘anno Domini’ (the year of the Lord) and that it is no longer PC to use it. I chose it deliberately over CE here since I was referring to the institution that originated the term!