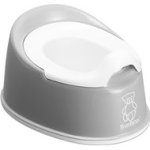 When we visited our grandson in March, he would occasionally use the potty with his Mommy or Daddy’s help. At 6 weeks old and just able to hold his head up, he was still wobbly on the potty. Patrick’s parents were sensitive to when he needed to nurse and similarly, they were learning his elimination pattern; such as usually peeing after napping or eating. It’s a matter of attentiveness, not precociousness. Babies signal when they need to go and caregivers respond to cues and take the baby to the potty — instead of the changing table. Learning about toileting early can mean hundreds, or maybe even thousands, of diapers saved for one baby. In the US, approximately 22 billion disposable diapers end up in landfills annually. In countries with limited water for washing diapers and even less money for buying disposables, children often make due without diapers.

Views of the planet from space reveal that the Earth is not a world without end. As its inhabitants, we are responsible for stewarding finite resources. Protecting the health of humans and the natural systems upon which we depend, requires our attentiveness and making changes. The degradation of natural resources jeopardizes our well-being and that of future generations.

For long-term fiscal responsibility, we need to balance deposits and withdrawals into bank accounts. We need to view the earth similarly; we can’t keep making withdrawals without overdrawing the account. The pillars of our natural systems are an interconnection of earth, water, air, and fire. We can only conserve, not create, air or water. We can use renewables such as wind or solar, to generate energy, but photovoltaic panels or turbines require input of resources to manufacture.  Composting allows the regeneration of soil from organic matter; but mostly what we have is all we have to work with. Consider, for example, a plastic water bottle. It takes energy (fire) to make the bottle out of oil (earth resources) to contain water; a universal solvent which our bodies require for life. Any manufacturing process generates emissions which may pollute the air.

As we commemorate Earth Day today (22 April), take one simple step to show your appreciation for Earth’s bounty:

Just because we’ve always done something a certain way, doesn’t mean we can’t change when we realize an alternative makes more sense. And the first step for changing is awareness. A single day a year is set aside for Earth Day. Like the steadfastness of mothers, the earth will support us, but we can’t take it for granted. Since there are no/few greeting cards to celebrate this spring holiday (my husband said the restraint is a matter of ecological sensitivity; I say there’s no profit margin for Hallmark or American Greetings), take one earth-friendly step to thank Mother Earth.