A physician recommended minimum 5 hour-a-month nature dose in Finland and pediatrician prescriptions for family visits to nature parks in California are pilot projects spurred by the recent studies on the healing powers of nature. Forward thinking doctors acknowledge: interacting with nature physically lowers our stress level.

If you are like me — an absolute mosquito and poison ivy magnet, you may think twice before stepping out into the woods. The good news is that studies now show that ANY kind of exposure to green pastures and trees reduces the stress hormone cortisol by as much as 16% in our bodies. Even watching videos of nature, without stepping foot outside, reduced the stress levels of prisoners in the Snake River Correctional Institute in Oregon.

But it is much more fun to get outside and see the beauty of nature for ourselves.

These new studies, combined with the 100th anniversary of our National Park System should be incentive for us to reverse the decline in visitors at our state and national parks. This decline in attendance at the parks began right around when email became a common mode of communication and American adults started to spend less time outdoors in any given day than they did in their cars.

I could go on an on about the deleterious effects of our modern society, but it all adds up to the same thing: we have to take advantage of our nation’s amazing park system. 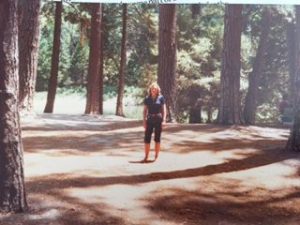 Some of my best family vacations took place at one or another of our nation’s over 400 parks and national monuments. I have some great memories of Yosemite and of Yellowstone National Park which became our first national park in 1872.  I was reminded of the beautiful scenery and geographic wonders when I checked out this BBC News story. The photos show the park pretty much unchanged by modern progress. Photographs of Yellowstone taken in 1871 were retaken in 2012 from the same vantage point, revealing much the same view as was seen 140 years ago.  (See the comparison in the link.) In fact, the conditions for viewing Old Faithful Geyser are better now than they were before the land became a park. National park status prevents the lands from being privately owned, developed or exploited.

Since 1916 the federal government has designated natural wonders, majestic vistas, historical battlefields and acheaologial sites as national parks, forests, seashores and monuments, preserving them for all to see and protecting them for generations to come. This process is in the news again as Obama considers making 2 million acres of land known as Bear Ears in Utah a national monument to prevent looting and destruction of this centuries old archeological site which still contains artifacts. But not everyone is in favor of preserving all of this land. The federal government already owns 65% of the land in Utah. The controversy that manifested itself in the take over of the wildlife refuge in Oregon is festering among Utah residents who claim protecting that land will further constrain and limit the local economy.

National park status can help the local economies if tourists like us go visit them. So go take your medicine!

One thought on “Take A Trip To A National Park — Doctor’s Orders!”