At dawn’s early light on Tuesday, the line of voters stretched for hundreds of feet, not unlike Black Friday sales events. By mid-morning, the line had grown even longer. Voters were out in force, committed to making their voices heard. For months, the election was THE topic of conversation, more than the unseasonably warm November sunshine or the colorful foliage, even though it has been a spectacular fall.

Before the polls closed, I turned off electronics for the night. My evening technology fast has the advantage of setting conditions for peaceful sleep. What would I do with any information obtained before bedtime? So, I didn’t find out the results until morning, which is when I learned of the electorate’s decision: Trump won. Now we need to figure out what this means for the United States. NOW, not just in January…

From her book for my Religion, Education and Democracy class, Professor Diane Moore claims democracy is “A state of society characterized by tolerance toward minorities, freedom of expression, and respect for the essential dignity and worth of the human individual with equal opportunity for each to develop freely to his [or her] fullest human capacity in a cooperative community” (10). Pay attention to the essential elements from that definition: tolerance, free speech, respect, and cooperation.  After campaign rhetoric that seems to have affirmed contrary values, how do we go about repairing the situation?

It’s feels like we’re in the midst of an acrimonious divorce, not unlike emotions that surely contributed to my neighbor’s homicide. At the trial that concluded on Election Day, the jury found the husband guilty of 1st degree murder and burglary and recommended two life sentences. The vehemence that existed behind closed doors seems to have seeped out, galvanizing incidents of hostility.

What does it say about our country that we have a President-elect whose speech exemplifies anti-democratic qualities? Do we respect him as Commander in Chief, while minimizing his example of family and democratic values? As my daughter-in-law put it: 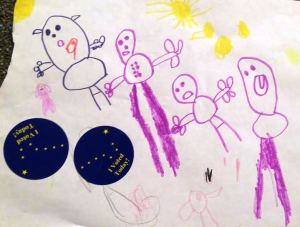 “Portrait of a family after voting: by Allison, age 3

Can this marriage be saved? Is it possible to return to united states and E pluribus unum, “Out of many, one”? It will be hard: requiring more listening, assuming the good intentions of others, and putting service above self.  That which doesn’t kill us can make us stronger, but it will take willingness and a good political marriage counselor to overcome post-election traumatic disorder.

What can we do? Prayer is a good start. As my granddaughter Rachel suggested, “I want to ask God to change his [Trump’s] heart so that he is nice to people.” From the mouth of a 5 year old to God’s ear. Democracy has spoken. Let’s come together to make America whole again. Do what you are able, in the community where you live, to make it better for all. We are better and stronger UNITED.

3 thoughts on “Democracy in action”