As I stood at graveside for a funeral at Arlington National Cemetery last week, I realized that on inauguration day, Donald Trump becomes eligible for burial there. During dozens of services as an Arlington Lady, I’ve heard the Chaplain’s reminder to mourners that no resting place at Arlington National Cemetery can be purchased; it must be earned through service. While Mr. Trump never previously served in the military, under Article II, Section 2 of the Constitution, when he recites the Presidential oath of office, he becomes Commander-in-Chief, the highest ranking officer in the armed forces. This provision was intended to assure civilian control over the military as a check on military power. 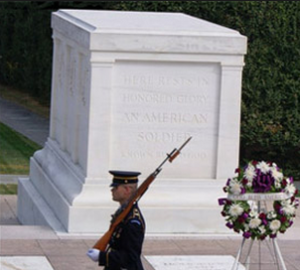 In some ways, the election campaign seemed like a game. Someone was going to win; someone would lose. The campaigning seemed to focus on using whatever verbal ammunition scored points to ensure success. Now the outcome is decided. As part of his transition, the President-elect may need some tutoring on what military leadership entails. Our service members deserve no less.

On Inauguration Day, the President assumes executive powers with the Oath of Office:  “I do solemnly swear that I will faithfully execute the Office of President of the United States, and will to the best of my ability, preserve, protect and defend the Constitution of the United States.” An oath is a promise, with a sacred overlay of meaning. It can indicate willingness to speak the truth, like in a court of law, or affirm readiness to put another’s needs before one’s own, like with marriage vows. An oath implies a sense of fidelity, more than the simple legality of a contract. What does Mr. Trump’s marital and business history suggest about his promise-keeping abilities?

It’s a curiosity to me that the military oaths of enlistment and for officers, as well as the naturalization oath of allegiance to the United States, contain the same phrase:

I will support and defend the Constitution … of the United States of America against all enemies, foreign and domestic; that I will bear true faith and allegiance to the same…

Only federal employees, the military and immigrants take this vow to “support and defend the Constitution” and “bear true faith and allegiance.” Does everyone else get a free ride with citizenship?

At West Point and in the Army, officers and especially commanders learn about selfless service; they may outrank troops, but they are responsible for ensuring the well-being of their soldiers before their own. The military is more about servant leadership than celebrity, with principles such as:

A commander is responsible for everything that happens and fails to happen. In good times and in bad… While Mr. Trump becomes eligible for a place at Arlington with the oath of office, he needs to make sure his actions warrant a spot in those hallowed grounds. He has an opportunity to redeem promising lives lost by keeping his promise. Words and deeds, Mr. President-Elect. Don’t screw it up. We may not have voted for you, but you won and this is not a game. Prove that we can count on you.

One thought on “I do solemnly swear…”