Finding the Right Title is an art all by itself. How do I convey the subject matter of a story and ‘knock out’ the reader all in one punch?

After the genius (ok, ok, 1% genius, 99% work) of writing a book, the author still has to come up with a title that will not only convey to the reader a hint of the content in the unturned pages, but will also make him/her desire to acquire the book.

I need the ‘right combination’ of words to make you want to read this book!

Think about the phenomenally successful TWILIGHT series. Originally, the author named the first book “Forks” (the name of the town that is the setting for the books.) Obviously the rest of the series would have been named “Spoons”, “Knives” and the final work, “Ladles”! “Forks” is definitely not quite as enticing as the mysterious and nuanced “twilight”. Maybe the books would not have been the ‘knock out’ hit by a different name.

I recently read an excellent book, From the Corner of the Oval, by Beck Dorey-Stein. This personal memoir of an Obama administration staffer, who just happens to have been a classmate of my daughter’s at Wesleyan University, has rightfully gotten great reviews and is featured in bookstores across the county. 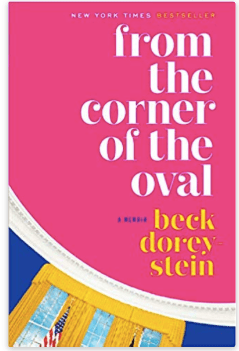 The book is so well written that it probably would have been a best seller even without the mysteriously intriguing title, but anyone who hadn’t heard the hype would have an idea of its subject matter and its excellent quality from that great title. Plenty of reviewers with a lot more “street cred” than me have given Ms Dorey-Stein rave reviews, so she does not need to add my praise to her list of kudos. However, since I was “wowed” by her clear prose with dexterous descriptions and captivating similes and since it handily meets book my standards for excellence, I have to give it my Wings UP!

I’m struggling with the title for the new historical romance I am almost finished writting. It is part of a three book series. I’m looking for the right moniker, the right hook. Currently the series is titled: The Journey of Cornelia Rose. But I worry readers will think: who is Cornelia and why do i give a fig about her journey? The title of the third book I’m pretty happy about: Saints and Sinners. It works on many levels, which the reader will instantly discern upon seeing the blurb on the back. But I am lost for a title for the first book. And the second book’s working title is Westward Ho! which the reader might take as a character reference to the heroine rather than to the westward journey which is the setting for the book!

I’ll let you know when I nail these all down!