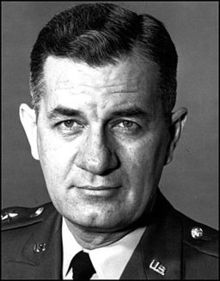 When I met Jack Norton he was eighty years old: energetic, outgoing and long-since retired after almost forty years in the US Army. I’d been waiting on a friend in the bar at West Point’s Thayer Hotel when he walked in and pulled up a chair. Norton was there for an alumni conference and wore a nametag that also noted his class: 1941. He’d graduated from the Military Academy right into the teeth of World War Two, and he’d been in the thick of it, parachuting into battle on four separate occasions, including the D-Day invasion of France. The German anti-aircraft fire that night, he said, was “like the ten biggest fireworks shows you’ve ever seen, except aimed at your head.”

Norton eventually retired as a lieutenant general, three stars. What did a guy who’d seen and done so much, I wondered, do in retirement?

“Oh, I stay busy,” he said. “I’ve got to teach my nine grandchildren how to pick a mate.”
This was not an answer I’d anticipated, and it must have showed because he was ready to demonstrate his method. He pulled out a felt-tip pen and a small stack of white index cards held together by a metal clip. (I’d learn later that he always carried these cards—he was, at heart, a teacher, and he was always ready to teach).  “I call this ‘The Five C’s,” he said as he wrote on the top card.

“First is character. You want to marry someone who is, at the core, a good person. And you find out who someone really is when they’re under pressure, when things aren’t going their way.”

“Next is commitment. Marriage is for the long haul; you don’t go into it lightly. You’ve got to stick by each other.” I wondered how his grandchildren, some of whom were still teenagers, received this message. Were they open-minded? Respectful but quietly dismissive of impossibly quaint ideas from a man who’d been born when Woodrow Wilson was president?

“Competence. You’ve got to bring something to the table. Doesn’t matter what your talent is, just that you contribute to the team.”

“Then there’s compassion. You want to spend your life with someone who cares about others, and not just people in the family, or people who can do you a favor.”

“Finally—and young people always put this first—there’s chemistry. The physical stuff can be beautiful, but it doesn’t have to last for you to have a great relationship.”

He handed me the card, then laughed and said, “Oh, and my granddaughter added another C. Cash. It doesn’t hurt.”

Fast-forward a couple of years. I’ve invited Norton to an event in Washington where I’ll be speaking of his beloved comrades, the paratroopers of the 82nd Airborne Division. He arrives early and is content to wait while the prep goes on around him, sitting at a cocktail table with one of the young women on the event team. She’s putting together nametags for the guests when I leave them. By the time I return, he’s got out the index cards, going through his five—well, six—C’s of How to Choose a Mate. Later that evening, after I’ve put the general in a taxi, the events staff—all young New York City sophisticates—invites me to join them for a celebratory drink at the hotel bar. The young woman Norton schooled is showing her friends the index cards. They’re mesmerized, nodding in agreement. At least one is using her phone to take notes.

“I wish I’d had this before I wasted seven months dating that dope,” another says.
A thousand self-help books on the shelves, and these women latched onto an index card containing the straightforward wisdom of a guy who was old before they were born.

Norton bequeathed some of that simple wisdom to my wife and me. He thought Marcia was just the best thing going, a sentiment she returned. Whenever I spoke to him on the phone, he’d end the conversation by demanding, “Ruggero! What’s the order of the day?” And the appropriate response, something I was to do as often as possible but at least once daily, was, “Hug Marcia, sir!”

Jack Norton made his last trip to France in 2004 to commemorate the sixtieth anniversary of D-Day. I have a photo of him in Ste. Mere Eglise, the first French town to be liberated by the Allies—liberated by Norton and his fellow paratroopers. He died later that same year.

On a sunny January day I drove to West Point for his interment there, next to Cheney, his wife and the mother of their three children. There was a smattering of grandchildren and maybe some great-grands with the family, sitting on cold metal folding chairs. John Norton, the general’s son and also a retired soldier, started the eulogy by asking the youngsters, “Kids, if Grand-Dad were here today, what would he say is the most important thing you can do in your life?”

In unison, in a tone that might have implied it wasn’t an especially difficult question, they answered, “Help other people!”

Marcia was home with the flu, so I called her as I climbed in the car to head home, and told her about the kids’ response. “How wonderful,” she said, “to leave such a clear legacy.”

I pointed the car south on the Palisades Parkway, the trees on my right gray and backlit by a low winter sun. My friend had piled up accomplishments and laurels, and I thought he’d probably laugh to think that his most treasured, most useful lessons fit on an index card. Simplicity really is the soul of wisdom.

Ed Ruggero has been studying, practicing and teaching leadership for more than twenty-five years, helping organizations develop the kinds of leaders people want to follow. His client list includes the FBI, the New York City Police Department, CEO Conference Europe, the CIA, the Young Presidents Organization, Forbes, the SAS Institute, Hugo Boss USA, CitiFinancial, Bovis Lend Lease, and Time, among others. He has appeared on CNN, The History Channel, the Discovery Channel, CNBC and Fox and has spoken to audiences around the world on leadership, leader development and ethics.

Ed is the author of eleven books, including Duty First: West Point and the Making of American Leaders, a study of leader development at the US Military Academy, and Combat Jump: The Young Men Who Led the Assault Into Fortress Europe, July 1943, which became a one-hour docu-drama on The History Channel. Ed is also the co-author of The Leader’s Compass, a fictional story of how one leader developed a personal leadership philosophy. His most recent book is The First Men In: US Paratroopers and the Fight to Save D-Day.

Following graduation from West Point, Ed was commissioned in the United States Army and served as an infantry officer in a variety of leadership positions, as well as an assignment teaching at West Point. Following his service, Ed pursued a career as an author, public speaker, and trainer. In 2007, Ed delivered a series of talks to business leaders in major cities throughout China. He also leads a Gettysburg and a Normandy Leadership Experience, where participants walk the ground of these great struggles to learn battle-tested leadership lessons that will help them meet their own challenges.