Yes, it seems like a paradox, but all week I have heard stories of seemingly immutable facts suddenly changing!

I was lucky enough to be invited to Harvard University’s graduation ceremonies, to celebrate my friend and co-blogger Joan’s completion of another master’s degree.

Angela Merkel, Chancellor of Germany, talked about the Berlin Wall, a wall that had blocked her from freedom, suddenly crumbling in 1989. In a powerful speech at Harvard’s commencement this past Thursday, Chancellor Merkel spoke of her life as a scientist, growing up and working behind the iron curtain. She described her commute, walking home from work heading towards the Berlin Wall. She moved the entire audience when she told her anguish, every night, having to turn away from Freedom to go to her apartment. But she exercised her freedom of mind, and had the courage to seek honesty and truth. She never imagined that one day that wall would not exist. But one day, after people across the countries in in Eastern Europe united and protested, that wall came  down. Her message to graduates: nothing is set in stone. We have to work together, think globally, unite over our common goals. Then we will surprise ourselves by accomplishing what is possible. 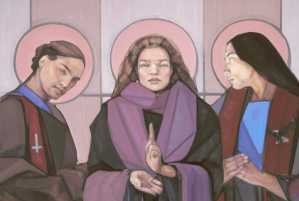 This message resonated this weekend at the welcoming dinner for FutureChurch Board meeting. Trying to change the Catholic Church by throwing stones at its walls from within often feels like titling at windmills.  The futility of our mission seemed evident to me, especially in light of some of the recent actions of Pope Francis. But the people of East Germany brought the Berlin wall down. Our FutureChurch group enumerated all that we collectively have accomplished: Catholic Women Preach a website platform featuring a different female theologian or other Catholic leader preaching every week; elevating Mary of Magdala back to her rightful place as an apostle to the apostles; and Save Our Parish  providing Catholics with tools to prevent their parishes from being closed– to name just three successes. All of these initiatives have contributed to changes in Vatican policy. FutureChurch is a beacon of hope to those alienated and disenfranchised by the institution of the Catholic Church.

The individuals who comprise the organization, just like my friend Joan, embody Chancellor Merkel’s message–working together, striving for the impossible, they accomplishing what is possible.

One thought on “Not Even Stone Walls Are Set In Stone”