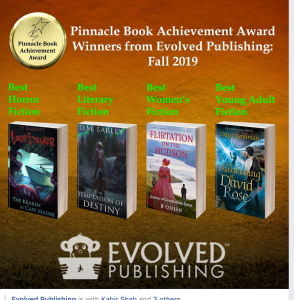 The National Association of Book Entrepreneurs has selected my book for the Pinnacle Book Achievment Award for Best Women’s Fiction. It is thrilling to have the many hours of writing and re-writing recognized as a job well done!

I already found it rewarding, after spending hours re-writing a chapter, and even several minutes picking just the right word for a sentence, to read the re-worked words and think ‘this is well-wriiten.’ It is satisfying to have the book say exactly what I want to communicate. When friends ask me what I am up to and I tell them,’ more editing’ they say, ‘Oh that is too bad. It sounds grueling.’

I can’t understand why they would think that…!

And now for the book to win this award, it is the icing on the cake.

It’s hard to be funny! I think it is harder to make an audience laugh than to terrify them with a horror story or make them cry with a tragedy. But getting humor right? I’ve often been in an audience cringing when a comedian’s jokes bomb. Right now the fashion is to use the “f” word a lot and have that pass as humor. But then I witnessed comedic genius. I saw Jerry Seinfeld’s new stand up show, recently. I was lucky enough to see him perform at Foxwoods and he was amazing. Funny and entertaining for over an hour. AND no cheap laughs from cursing! Whether or not something is funny is very culturally specific, and very grounded in striking a cord with the listener’s or reader’s funnybone.  I could never even hope to be a comedic genius like Seinfeld, but the fact that so many readers GOT my humor, and reviewers complimented it is very rewarding. 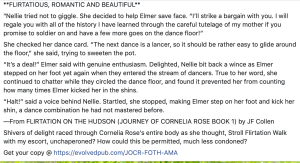 Now if you’ll excuse me, I have to get back to editing. Book Two is on its way!

IndexCardCure(TM) one edit at a time

2 thoughts on “And The Winner Is…. Flirtation on the Hudson -Best Women’s Fiction”