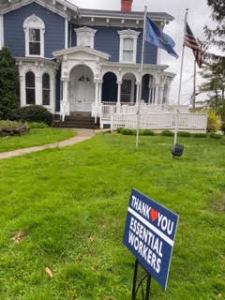 Some states are easing lockdown restrictions, amid controversy.

According to a growing majority, it is time to Stop the Panic. Scot Atlas, M.D. makes five major points in evaluating COVID19 which should provide a road map for reopening the country. Dr Atlas calls for policy makers to examine what actually happened, and make decisions based upon that data, rather than upon fear and speculation.

The speculation is endless. It leads to projections that universities will remain closed in the fall, sports will never be played in front of live spectators, and children won’t be sent back to school until it is 100% safe. (When in this world would that ever be? #homeschoolingforever.)

The single fact we know about COVID 19 is that it is highly contagious. Every other fact seems to be debated. Who has it? How long does it last? What are the symptoms? However, all the data continues to show the majority of people in the world have no significant risk of dying from this disease.

In the meantime, medical personnel in some areas are working around the clock while others are furloughed. Unemployment numbers are the highest in U.S. history, people can’t pay rent, landlords can’t pay bills. These are only a few of our economic woes. And the longer lockdown lasts, the worse the economic crisis will get.

In all this choas, I did the only thing I could – when exposed to COVID I self-quarantined. But the two weeks turned into almost 2 months – because in the meantime I got mild symptoms, which took over a month to resolve.

So today I did the only other thing I can do. After several days of no symptoms, I went to the doctor for an antibody test, to qualify for donating plasma. My primary care physician’s office now offers two kinds of testing, one to detect COVID 19, the other to detect its antibodies. I want to do my part, not only to help someone with life-threatening symptoms get cured, but also to be counted. I want to add one more bit of data to the statistics of who had the disease, who recuperated, and who got the antibodies.

I hope this will start a trend of establishing more data, thus helping us re-start the world.