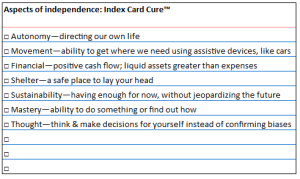 On the 2nd of July in 1776, Congress adopted the Declaration of Independence, proclaiming its intention to divorce Great Britain. In spite of firmly entrenched British law and customs, and the economic dependence on England, the colonies were simmering pots of independent thinkers.  Separate interests emerged in the interdependent societies.  While some might argue it was actually a conservative move to separate from England in order to maintain the democratic government that was evolving, over the years before the signing, acrimony developed between the two countries.  Signing the separation agreement launched the Revolutionary War.

Because the document was dated for the 4th, that has become the day we celebrate. Today on the 4th of July—Independence Day—we are less likely to consider the founding fathers, their efforts to get consensus, and a seven years’ war; and more interested in picnics, fireworks, and a holiday from work.

For me, thinking about independence recalls its opposite: dependence. After a paralyzing parachute accident, I regained independent movement very slowly. From getting log-rolled in a hospital bed, to sitting tentatively after back and ankle surgeries, I finally graduated to mobility devices like wheelchair and walker. In the early days of recovery, independence was the ability to get what I needed without calling a nurse and moving without a physical therapist steadying me with a waist belt.  During that time in my life, I experienced multiple, incremental victories of independence and a resolution to not take the ability to move for granted.

At a recent event, a veteran mentioned how he will drive until he feels a seizure coming on, and then he pulls the car over and lets someone else drive. For many, driving is linked with independence, but what is the potential impact on others, if you know your health issues may compromise the ability to operate a multi-ton vehicle safely? Where does your independence trespass on the rights of other people? The very act of driving itself is unsustainable. If gasoline, automakers, and infrastructure weren’t subsidized, would we be inclined to equate driving with independence? In many places in the US, we have erected a landscape that fosters dependence on car travel. How can we design a system that promotes real independence of travel?

Independence is a relative term and there are few areas where we are truly independent of others. Today is a good day to think about our inter-dependence and express gratitude for the people and government services that allow us to operate as freely as we do.