What do you take for granted?  It seems like everyone is guilty of not valuing some person or aspect of their lives, until he/she/it goes away. On Tuesday, the power went out during my spirituality group’s meeting. We had gathered in a basement classroom of the church’s ministry building. The food pantry workers were in the hallway prepping for distribution the next day. First Communion meetings were taking place on the first and second floors.  It was a typical evening at OLQP with lots of people and activities.

We had just begun when the lights flickered and went off. After multiple episodes, we reached a steady state of no power. Fortunately for our group, the room was illuminated with backup emergency lights and a candle, now for more than just ambiance. Also, cell phones have many clever features, including flashlight apps, which provided task lighting. Aside from the initial kerfuffle and curiosity, our meeting proceeded as usual. During the evening, Joe, the church’s nighttime tech wizard and problem-solver, checked in and explained that surrounding streets were also in blackout mode and reminded us to blow out the candle. As we  departed, the lights came back on, almost like the first lighting of a Christmas tree.

While we were minimally effected by the power outage, the situation reminded me of how integral electricity is in our lives. Yes, it’s a convenience, but isn’t it really a necessity? We have an expectation for reliability. Flip a switch; the light turns on. Your mobile phone is getting low on power; you find an outlet and plug in to recharge. The refrigerator keeps food from spoiling. Even gas appliances often have electric components, such as displays on oven, water heater or furnace. 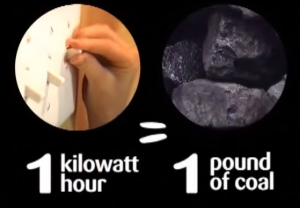 When our group did a study on climate change a few years ago, we viewed a documentary, Kilowatt Ours. While I haven’t vetted the statistics presented in the film, there were a few images that stuck with me. Electricity is measured in kilowatt‐hours (kWh) and approximately one pound of coal is required for 1 kWh. The average US  household uses about 30 kWh each day, so the typical home burns about 5 tons of coal per year for electricity. One image that has lingered is what 5 tons of coal would look like sitting on your driveway. 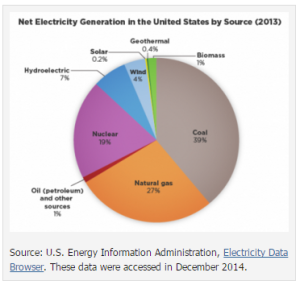 In 2014, the United States generated about 4,093 billion kilowatt hours of electricity, with about 67% sourced from fossil fuels (coal, natural gas, and petroleum) and 19% from nuclear.

Electric company end-users (customers) care primarily about reliability. Unless we live in a coal state, we often don’t think about other social and human effects. Environmental impacts include mountain top removal from mining and the byproducts of refining, such as toxic coal-ash water diverted into local creeks and the long-term contribution to higher global temperatures and extreme weather events.  We may care about how much our monthly bill is, but many collateral consequences don’t appear until later, like carbon-emission health issues such as respiratory and cardiovascular diseases.

If you live on the electric grid, you care about electricity. Do you know where your power comes from? How does your electric company generate its power?  How much electricity do you use each month?

Let’s leave the coal for Santa and encourage a conservation nation:

If you can flip a switch and turn on lights, give thanks. If a microwave heats some leftovers or a coffeemaker gives you a hot beverage, what a delight. It’s almost magic. 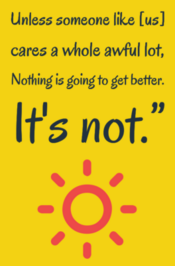