My father used to tell me that he didn’t eat red meat. He always cooked it or ordered it well done, so it was brown. While it made me smile, his comment is typical. For an action that we do on a regular basis (if we’re lucky), how much do we know about what we eat?

Eating is an intimate act. Not only do we invite food onto our tables, but we put it in our mouths. What do we know about where our food has been or in the case of animals, how they have been raised and killed. Americans tend towards a meat-centric diet with animal protein often the item around which a menu is planned. If you count yourself a carnivore, you may want to consider some unexpected consequences of that choice. 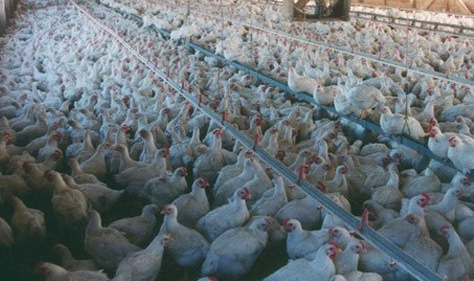 Most animals raised for food are fed antibiotics to combat unsanitary conditions; sometimes even their water is laced with pharmaceuticals. If you hunt and fish for your meat, you don’t need to worry, but the closest most people get to hunting is searching for a close parking space at the grocery store. Most of us are at the mercy of farmers, who are usually sub-contractors to multi-national corporations which specify legally binding living conditions for the animals.

Overuse leads to resistance and common antibiotics are increasingly ineffective or useless against certain germs. Since Alexander Fleming’s discovery in 1928, antibiotics have improved survival by killing infections. But less than 90 years later, overuse has caused bacteria to evolve, reducing the effectiveness of antibiotics. While physicians are increasingly cautious about prescribing drugs, 80% of the antibiotics sold in the US are for animals–more than 32 million pounds in 2013.

Weigh more on less food. In the 1950’s, scientists discovered that antibiotics cause animals to gain weight faster, which enhances the profit margin for the farmers. If animals are ready for market sooner, they require less care and less feed. Does antibiotic weight gain apply to the end-user as well? Will the person who eats the meat gain weight faster too? That could lead to a big problem since approximately two out of three U.S. adults are overweight or obese (68.6 %) according to the Center for Disease Control.

Farm to table to hospital? Intensive animal farming called Concentrated Animal Feeding Operation (CAFO) can breed superbugs; passed to humans through meat, dairy and eggs. Animals excrete waste and industrial farms concentrate the manure of thousands of animals, with no safe way to use it or dispose of it. The USDA estimates that farms create more than 335 million tons of dry waste (water removed) annually on farms in the United States. In most cases, the law does not require that livestock manure be treated. Waste runoff pollutes water, land and air; compromising everyone’s health.

People can be sickened through food handling or eating contaminated food. Even though supermarket meats are regularly sampled, contamination prevails (results published by federal scientists, 5 Feb 2013.)

Yuck factor. We were stationed in Germany in the ‘80’s when there were outbreaks of mad cow disease [bovine spongiform encephalopathy (BSE) belongs to a group of diseases known as “transmissible spongiform encephalopathies” (TSEs), or brain-wasting diseases. The human disease is known as variant Creutzfeldt-Jakob disease (vCJD).]  Cattle feed was mixed with rendered products made from other cattle. Tissue from an infected cow’s brain or spinal cord may be found in some hot dogs, taco fillings, bologna and other products made from ground meat. Humans can contract the disease from eating meat from cattle infected with BSE. Even though I’ve been vegetarian since the ‘70’s, I am still prohibited from donating blood because of having lived in Europe.

We are what we eat. Food is essential and good food is vital to human health.  Humans need regular nourishment to keep our bodies functioning properly and energized. Whether you live to eat or eat to live, pay attention not only to appetizing options, but also animal welfare, food safety, and the impact your choices have on the environment .

3 thoughts on “Food for thought”