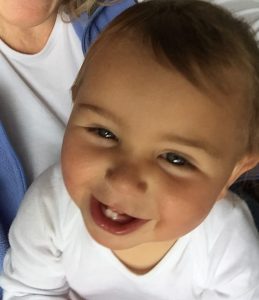 My granddaughter is turning one! Wow! Did that go fast.  I wonder if somehow we skipped part of the year. It is so disconcerting that spring has been colder than winter was, maybe it’s really still March and Eliza’s first birthday isn’t almost here. . .

In honor of her birthday I want to share with you a post her Daddy wrote: BYE BYE BABY. It is so well written and so moving, I want to feature Paul as a guest writer this week. That Paul’s blog is exceptional is not just the opinion of his favorite Mother-in-law –WordPress saw it and asked him if they could feature it too! The link will lead also you to his other posts, chronicling the trials and tribulations of fatherhood.

This feeling that Eliza’s whole first year was truncated into about 2 weeks has me waxing poetic about time.

I think the older I get, the more time speeds up. Einstein was right — it IS all relative. Days certainly feel shorter. I guess when I was eleven, one single day was a bigger percentage of the amount of time I had been around than it is now. Now that I am this (unspecified) age, days become like pennies — such a small part of my many and varied riches I hardly notice them at all. I still want to make each day count, but I just can’t count them all.

I think my co-blogger Joan’s post on Tuesday really kicked this whole perhaps cliched ‘brevity of time’ topic off for me: while I can believe that I have known her since I was 12, I just can’t believe how long ago that was. We have shared some great times, some terrible times, some ordinary times and some narrow escapes, but all the times have been richer for the sharing.

So while having ‘the luxury of time’ isn’t one of the blessings I count every night, I have so many other blessings to be thankful for, who has time to worry about the passage of time?