Maybe it’s the influence of reading Gothic literature during the first week of summer school… Or a byproduct of wandering streets in a quirky, historical town… Or perhaps, the after-effects of completing a circuit on the labyrinth (it was at a divinity school, after all)…

I’ll give my granddaughters credit. Their beliefs have cast a spell, “If we build it, they will come.” They created a fairy habitat in the hopes of enticing visits from fairies. The girls will be annoyed that I didn’t share the experience. It’s not fair that I encountered a fairy without them around to say hello also.

Of course, was she really a fairy? Or a princess under the spell of a sorceress? She certainly didn’t look like my stereotype of a fairy. But you’ll have to decide for yourself… 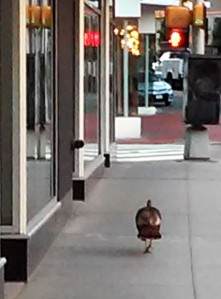 While heading home after my morning walk, I encountered a big bird (not Big Bird) waddling ahead of me. I can’t say I completely trusted what I was seeing. Where she was coming from? Did she miss her fairy godmother’s solstice curfew? Was she finishing up some research at the library and lost track of time? The bird certainly seemed to know where she was headed. I hurried to catch up.

After confidently turning left on Massachusetts Ave, she stopped midway down the block to peer in a window. Browsing for a new gown? Or just checking her image in the reflection?

A jogger passed the bird and she (bird) didn’t spook. Another woman approached and we exchanged looks of wonder. It’s not every morning that you meet a fowl on your commute. Is it a turkey? Will she be safe on the busy street?

I still don’t know if she’s someone’s pet or a princess under a spell, but I think I know where she’s headed. She’s off to the ball. I hope someone tells her the party isn’t until tonight.