7 July 1976. Forty years ago. It was the year of the bicentennial of the United States. A flotilla of tall ships paraded in New York City harbor. And I entered West Point for Beast, probably the most psychologically and physically grueling voluntary seven week of my life. But I and the other 1500 new cadets chose to be there. We could leave if we wanted. I seem to recall we were reminded of our decision on a regular basis by the upper class cadets who led our training and suggested maybe we should resign.

The orientation experience to the United States Military Academy and the Army deserves the name Beast Barracks. New cadets try to figure things out without standing out. Between psychological intensity and grueling schedule, it’s a memorable time. So, you would think that I’d remember more about what went on. My list seems to only include highlights, although the high part makes it sound more positive than I recall, even this many years later.

Some of our “summer camp” activities included physical training (PT), which always included a run and sometimes required carrying rifles. We did PT in combat boots, which made workouts harder and contributed to bonus shin splints for many. The rifle adds more weight, but it was the carrying part that made the runs more difficult, and not just the extra time spent drawing weapons in the arms room. We were evaluated: posture, pull ups or flexed arm hang, and how well we swam. There were ski slope hikes, which generated blisters and were usually a precursor for field training. Overnight bivouacs, learn to shoot a rifle and throw hand grenade, and the gas chamber. Getting issued and fitted for uniforms and learning how to wear them . Haircuts. Learning to shine shoes and boots. Memorizing Plebe “poop”. More haircuts. Inspections. Bayonet drills. Drill and ceremony. You’ll notice the absence of arts and crafts opportunities, but at some point, new cadets could go to the chapels on Wednesday nights for an ice cream social. 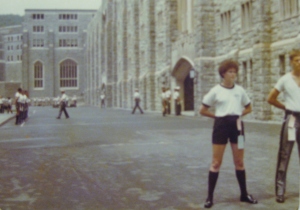 New cadet decision making was limited to stay or go. Someone else figured out intricacies of the training schedule: where we need to be, what we need to be doing and what we should wear (wearing the wrong uniform brought me two disciplinary tours, so I remember that part). New cadets tried to follow orders. And Beast Barracks was only the beginning. A 15 (?) mile hike back from Lake Frederick introduced us the Corps of Cadets who were in really bad moods due to reporting back from leave, the “real” Army or anywhere but West Point. From our vantage point of completing Beast and making it to Reorganization Week, we still had plebe year to survive. And as Colonel Kirby showed us on a slide, we had made minuscule progress out of four long years to graduation.

This year, I am spending seven weeks in summer school–also voluntary and grueling, but tough in a different way. Class meeting times  represent the “big rocks” in my schedule. Everything else must fit around those. But I won’t succeed unless I follow the syllabus, read the readings and write the papers. Almost like 40 years ago; except now I can have ice cream any time I want.