Peaceful protests are a feature of our democracy, guaranteed under the First Amendment. People across the globe marched on Saturday, as demonstrators gathered a day after the inauguration of President Trump. Estimates vary, but half a million or more people converged on Washington, DC, the largest of the world-wide Women’s Marches; Antarctica may have had the smallest contingent (motto: “Penguins for peace.”).

Many of the attendees carried placards highlighting various causes. There was such an outpouring of peaceful activists that the march turned into a rally. Like others who ventured to the downtown Mall area, we were crammed shoulder-to-shoulder and movement was limited. Despite the crowds, DC law enforcement reported no arrests related to this event.

Speaking at the DC March, Actress America Ferrera inspired with her message: “We march today for the moral core of this nation. Our dignity, our character, our rights have all been under attack and a platform of hate and division assumed power … But the president is not America. … We are America and we are here to stay.” The election galvanized civic activism; casting a vote represents just a preliminary democratic step. The message of the march is that citizens are not just watching this administration, but prepared to act in the spirit of citizenship and ensure that human rights, dignity and justice continue as hallmarks of the United States. 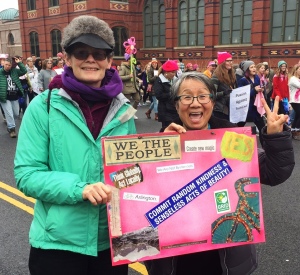 The DC Women’s March pledged: “We join in diversity to show our presence in numbers too great to ignore. … We stand together, recognizing that defending the most marginalized among us is defending all of us.” Guided by the notion that women’s rights are human rights, the global marches upheld principles of nonviolence:

The secret of change is to focus all your energy not on fighting the old but on building the new. Socrates in Way of the Peaceful Warrior: A Book that Changes Lives by Dan Millman

On January 21st, we came together to raise our voices. The March is over, now what? After gathering in solidarity on one day, the work must continue. The next step is to determine the best way to channel the momentum into action. Now is the time to convene friends, family and community together and ACT. Womensmarch.com is guiding a post-March campaign, “10 Actions for the first 100 Days”. Make your voice heard. Stand together … for the protection of rights, health, and families – recognizing that vibrant and diverse communities are the strength of our country. May our future actions spring from here.

We marched.
For women, for peace and freedom and justice,
a hundred seventy five thousand strong in Boston,
joined in umbilical hope with millions more, we marched.
We marched to say we won’t look away from injustice,
to say we will not exclude or demean anyone, that justice is for all.
We marched to pledge ourselves to live gently but out loud,
to live with love and reverence, to heal and bless,
to include the outcast and lift up the downtrodden,
to speak truth, to work for justice and to be people of peace.
We marched in resolute hope, not anger.
We marched in wonder and gratitude for the power God gives us
to resist evil, to love our neighbor and heal the world.
We marched to surround ourselves with joy, beauty and hope.
It was not a protest; it was an affirmation.

Too far from the stage to see or hear, we cheered for the cheering.
Packed like crayons in a box, unable to move, no one became inpatient.
Calm, positive and kind, we simply basked in creativity and good will,
and enjoyed our diversity, unity and comradeship.
Yet underneath the happiness was a fierce resolve and resilience.
There was a clear knowledge that we are facing a great evil.
And there was awareness of our indomitable strength:
that we are given power to resist evil. It was the Reign of God.

Now we know. We are awake. We are not alone.
We have each other. We have hope. We have power.

From this day on you can wear a pink knitted hat. You can carry a sign.
Or you can be a sign, a sign God carries into the world,
a sign of justice and freedom and healing.
Your life can be a joyful affirmation that even among fearful forces
God is at work. We are not alone.

In your vast crowd, in your little parade of one,
we are together in this.
Don’t be afraid. Don’t give up.
March on!