What will you do when you grow up? Children often get asked this question, but it’s one we should continue probing throughout life, remembering as we get older, the answers will vary. We are not one and done. Life is change, and what happens is often not under our control.  For certain transitions, the planning process is proscribed and intensive: getting married, applying to college, or finding a new job. However, we don’t always give as much thought when we move from one life stage to another, which is why Bill Casey’s deliberate approach to retirement intrigued me. Bill’s intensive planning process is not for everyone. Upcoming essays will describe approaches followed by others, which may align more with different personalities.

Rites of passage provide guidance for life changes, and often generate elaborate ceremonies during special occasions like christenings, graduations or weddings. Facing transitions intentionally helps people deal with uncertainty while exploring what they desire in a new phase. One book Bill used as a guide was Transitions: Making Sense of Life’s Changes by William Bridges who suggests:

Find out what is waiting in the wings of your life. Whether you chose your change or not, there are unlived potentialities within you, interests and talents that you have not yet explored. Transitions clear the ground for new growth. They drop the curtain so the stage can be set for a new scene. What is it, at this point in your life that is waiting quietly backstage for an entrance cue? What new growth is ready to germinate in this season of your life? (Bridges, 81).

As he faced the end of government service, Bill took several years to plan his commencement, devoting time to discerning and anticipating his next steps. What was calling him and what would it take to achieve that?  Bill knew he wanted something different; he also understood it wouldn’t happen without a plan. While employed at the Department of the Treasury, Bill had longed to take a sabbatical, a break often associated with academia. The words sabbatical and Sabbath share similarities: both encourage a pause, as a way to re-calibrate and recharge. Since his government agency has independent compensation authority, Bill even submitted a suggestion to give employees the option of receiving a bonus of time rather than a cash award in recognition of exemplary performance. While the proposal was disapproved, Bill forged ahead with the idea and created his own retirement transition blueprint, devising a plan which encompassed a variety of experiences intended to nurture aspects of body, mind, spirit, and relationships.

Transitioning from the defined roles, structure, and compensation of professional life can be particularly disorienting if not anticipated and approached deliberately.  For decades, you may have headed to an office each day, complete with job title, colleagues, and a sense of purpose. The removal of those arrangements with their concomitant marks of identity can be profoundly unsettling. Bridges contends:

The homeward journey of life’s second half demands three things of us: First, we must unlearn the whole style of mastering the world that we used to take us through the first half of life. Second, that we resist the longings to abandon the developmental journey and refuse the invitation to stay forever at some attractive stopping place. And third, that we recognize that it will take real effort to regain the inner “home” (Bridges, 52).

Retirement can provide the opportunity to take measure and redirect life energy. Someone who reaches age 60 in reasonably good health is likely to live another 30 years. Between savings, pension, and social security, these steady sources of income can provide a degree of prosperity.  While there are no guarantees about the continuation of a healthy, financially secure future, they give a platform from which to launch what comes next. 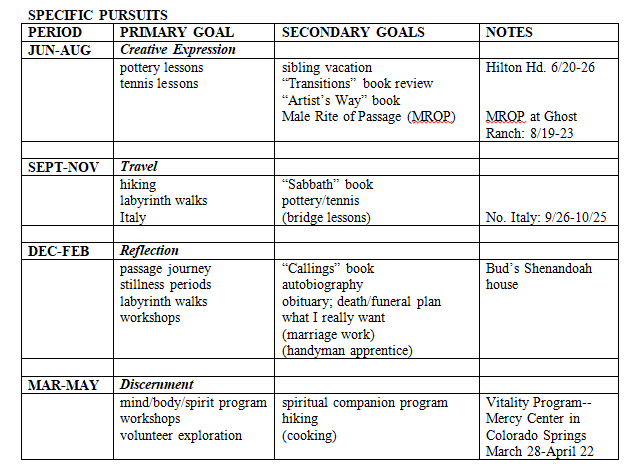 Bill shared his detailed planning process, including a document in which he described motivations, hesitations, desires, and concerns, ranging from specifics like feasibility, dates, costs and potential barriers (e.g. his boss’ resistance to Bill’s retirement) to more nuanced considerations: How would a sabbatical help him discern his future calling? What would be the effect on his relationship with his wife?  The brainstormed list comprised a touchstone: Why am I doing this? What do I know; what don’t I know? What do I hope to accomplish? What do I want to explore in more depth? Asking questions is always a good starting point. Bill used his sabbatical to explore answers, guided by a matrix that divided his first post-retirement year into four quarters with primary and sub-goals.

Since completing his sabbatical a few years ago, Bill’s post-work life is abundant and prolific. The fruits of his contemplation include several ministries as he embraces a role as “wise elder.” He explores spirituality through male rite of passage (MROP) rituals and contemplative practices. He’s involved with Restorative Justice including an alternative accountability program for Fairfax County (VA) juvenile offenders and Healing Circles for those harmed by Catholic clergy sexual abuse. He also serves as facilitator for a jail Bible Study and as Stephen Ministry leader. For fun, Bill travels and golfs.

Next up: Kris Casey’s generative and generous gift