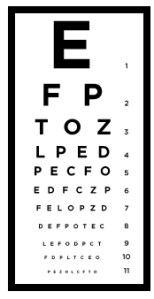 I get eye exams conscientiously. Apparently, I’m at risk for glaucoma and retinal detachment. I’d rather monitor my eye health than wait for a problem to ambush me. So, each year, I go through a comprehensive exam with visual fields screening and dilation. The visual fields test diagrams each eye’s blind spot, a segment without image detection. Having blind spots are normal due to areas lack receptors. Because most people have two eyes, the blind spot in one eye compensates for the blind spot in the other. Every human has blind spots—we just don’t realize it.

You might say that we are blind to our blind spots, not only physiologically but intellectually. Perspective shapes perception. Social scientist Donna Haraway calls this situatedness, which “recognizes the subjective nature of all knowledge claims.” Predetermined ideas color our vision. We don’t look at things in isolation—we always view the world through our particular lens. Even if we think otherwise, no one can be completely objective; we see the world as we are. Recognizing this prejudice requires humility, especially since we’re inclined to confirm pre-existing biases by reinforcing them with similar arguments. People opt for echo chambers, instead of investigating differing viewpoints. Social media algorithms populate news feeds with like-minded posts, thus ensuring that complementary opinions are brought to your attention. It makes it seem like everyone thinks like you.

We apply a “god-trick” to our beliefs, crediting them as absolute and universal truths, when in fact our knowledge is always based on perspective. And, we make assumptions about other people based on our “situatedness” without considering that their beliefs are also contextual. It’s a wonder that anyone is able to communicate. During hospital chaplaincy training, we were instructed to describe observations about a situation instead of making a judgment, because it’s very likely that we don’t have the whole story. Someone’s perspective or actions may differ from ones I would hold or take. Who am I to say that they are wrong? You may have encountered a situation when a child shows you a drawing. You exclaim, “Oh, what a beautiful tree”  and the child informs you that it’s a skyscraper. It’s better to invite her to “Tell me about your picture.” Don’t assume that you recognize the figures or know what the picture is about.

Reality is complicated. We see through various filters such as race, gender, or even something as changeable as mood. Everyone has areas of knowledge about which they are ignorant. Some are gifted in subjects that we know little about and little interest in learning. Our intellectual blind spots become problematic when someone tries to bluff, pretending he knows more than he does.

These days, we fight about facts and truth. Facts are evidence-based and can be proven based on empirical research and quantifiable measures. But, because truth depends on a person’s beliefs, perspective, and experience, some may dismiss, deny, or ignore the facts. Stephen Colbert coined the word, truthiness, to differentiate between facts and truth. Truthiness is “the quality of seeming to be true but not necessarily or actually true according to known facts.” Take the issue of climate change. For every environmental scientist whose research indicates a linkage between carbon emissions and a warming atmosphere, there are those who cling to an opposite belief. We may realize the problem with running a car inside an enclosed garage, but don’t extrapolate from our singular example and perspective to it means on a global scale.

Seeing clearly, even with vision corrected, is challenging. It requires humility to recognize that we don’t know it all and may be wrong. Try an experiment: find someone, IN REAL LIFE (IRL) not online, with a differing viewpoint and ask him to help you understand why he thinks the way he does. Just listen, and maybe ask clarifying questions. But be willing to open your eyes to a different way of seeing.