Including the resources we use; they should not end as garbage.

I’ve never been a linear thinker. therefore the goal – to make our economy circular, like the rest of the patterns of the universe, makes sense to me. There is an international movement to replicate the cycles of nature and the circles of life in our global industrial economy. Companies like Nike(R), highlighted by my co-blogger in response to my post two weeks ago, already have active programs to return their products back to raw material for reuse. Nike Grind accepts donations of worn-out athletic shoes and grinds them back into raw material for new apparel, shoes and surfaces, like running tracks and playground turf.

It’s a start — now I have two places to give unwanted shoes so they don’t end up in landfill.

But a recent article I read in National Geographic confirmed the alarming amount of garbage filling the world. Everything we use –footwear, clothes, plastic goods, metal and machinery, and food– its all still with us, in various stages of disgusting decomposition. The figures documenting this waste are astounding.

Taking this information to heart, I reviewed my personal space. 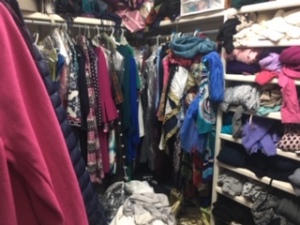 Done with recycling shoes, I viewed the clothes in my closet and faced the gobsmacking fact that in 2015 the world threw away more than 450 billion dollars worth of clothes.

How can I add my unused clothes to that massive pile?

The first step might be a fashion tip – older things can be combined with a new fashion and repurposed in my own wardrobe. Ok, maybe a skill I need to acquire. The fast fashion mindset is a major culprit of the burgeoning clothes landfill. According to research, because clothes are so cheap people now wear their clothes a third fewer times than before 2015 before tossing them. The solution is simple: keep using your clothes and don’t buy more, and there will be less waste. But what about fashion? (And what about the economy? Those fashionistas keep the economy moving.) Am I skillful enough to use Rent The Runway to perk up old pants with a new, borrowed sweater or jacket? I’ll try…

More sorting and more legwork is involved to avoid the clutter of clothes I can’t use sailing around the sea for the next century. I know the clothes I throw into a donation box do not just get distributed to those who need it. Most of it gets sold. To get around this I usually try first to give it to more local organizations, right there at the front lines, that are connected directly to people in need. But, if those organizations don’t use it, they toss it in the donation bin. So those clothes not thrown in the garbage get bought by big companies that sort them, according to the item’s reuse and desirability, and try to resell them.

I took heart from some other facts in the Nation Geographic article – such as, “In Russia and East Europe, prized items such as women’s underwear can fetch up to $2.50 a pound.” according to a representative of The Boer Group, a Dutch company in the clothes recycling business. I always thought no one would want pre-owned underwear!  Then, as I mentioned in my last blog there is Soles4Souls which in addition to shoes, takes gently used clothes. But I am afraid that while they are still in good shape, some of my clothes are just so old, no one will want them. (The reporter interviewing the representative of the Boer Group was told the jacket she was wearing would be worthless…that would be me!) 40% of the donated clothes are unwanted and shredded for mattress stuffing and wipe cloths. At least those clothes do not end up in landfill.

I was intrigued by a program in Italy that sorts wool into colors, washes and shreds it and then spins it back into yarn. Wow, that lucky 1% of textile waste that gets a new life.

It may only be, quite literally, a single scrap on the big garbage mountains of the world, but I for one am inspired to do my part. On this leap day, a small step can lead to a giant leap. And we can change the linear path of our raw materials to a circle of reuse.

One thought on “ALL Our Lives Should be a Circle!”