As recounted in all four gospels in the Bible, Mary of Magdala was first to encounter Jesus after the resurrection — a woman! Over millennia, she has been vilified, erroneously called a prostitute. A retraction in 1969 by Pope Paul VI started the process of redeeming her reputation and clearing her name. In June 2016, Pope Francis declared her as “Apostle of the Apostles.”  The Roman Catholic Church now celebrates her feast day annually on July 22nd.

No matter whether you consider the Bible historical or mythological, Mary Magdalene comes across as a unusually courageous woman. Her name is mentioned 12 times in the Gospels, more than most of the apostles. She’s identified by her town, Magdala, rather than in relation to family. Scholars think that her wealth helped support Jesus’ ministry financially.

The gospel of John recounts the Easter story where Mary finds the empty tomb and sees Jesus. Imagine the trauma and grief Mary Magdalene and Jesus’ friends experienced during and after the crucifixion:

Shock: Mary witnessed her friend’s torture and execution. How could this have happened? It wasn’t supposed to end like this. From the Palm Sunday heights of glory to agony and seeming defeat. There’s a sense of disbelief. While others fled, women are credited with staying at the cross — faithful to the end.

Seeking: Because Jesus died shortly before the Sabbath began, there hadn’t been time to prepare his body properly for burial. When the Sabbath was over, despite fears, Mary Magdalene ventures out. She searches for the tomb in darkness in order to anoint Jesus’ body. Her icon often shows Mary Magdalene carrying a flagon of myrrh oil. The gospel indicates she encounters angels in the empty tomb and a gardener, who turns out to be Jesus. They ask about her sadness: “Woman, why are you weeping?” Not to be sacrilegious, but under the circumstances isn’t that a “Duh?” question?

Surprise: The tomb is empty! Who took the body? Where is it? She questions a man in the garden. Only after he speaks does she recognize him as Jesus. This decision by Jesus to reveal himself first to Mary — his friend and benefactress — speaks to the intimacy of their relationship. She runs to proclaim the good news to the others: “I have seen the Lord.” 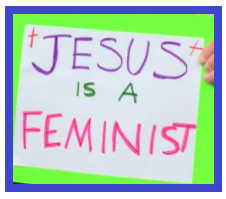 That’s not the only surprise. Some theologians consider it a miracle that Mary Magdalene wasn’t written out of the story –- a woman actually received credit as the first witness to the resurrection. In Dan Brown’s controversial book: The Da Vinci Code, Jesus has married Mary Magdalene and fathered a child. Whether true or not, the book’s premise and subsequent banning has helped bring Mary Magdalene’s story to the forefront.

According to legend, Mary Magdalene gained an audience with the Roman emperor after the crucifixion. She talked with him about Jesus’ resurrection, using an egg to illustrate her point. Caesar was skeptical and said there was as much chance of a human returning from the dead as for the egg turning red. And then the egg turned red. Orthodox Christians exchange red eggs at Easter: an egg symbolizes new life; red represents Christ’s blood. The shell signifies the sealed tomb, while its cracking represents resurrection.

FutureChurch annually honors the ministry of St. Mary Magdalene, recognizing her status as primary witness to the most important event of Christianity. The organization also advocates for increased liturgical roles for women and promotes Catholic women preachers.

Mary Magdalene’s example reminds us to act and speak out. Don’t let fear or sadness get in the way of speaking your truth. She was there at the moment of Jesus’ death and at the wonder of new life. The ending is a beginning.