Renee Adams shares poems and books, curating a poetry fence and maintaining a Little Free Library (LFL) in Alexandria, VA. When I happened by on a drizzly February morning, Renee was sweeping broken glass from the gutter, afraid that a car would inadvertently puncture a tire. 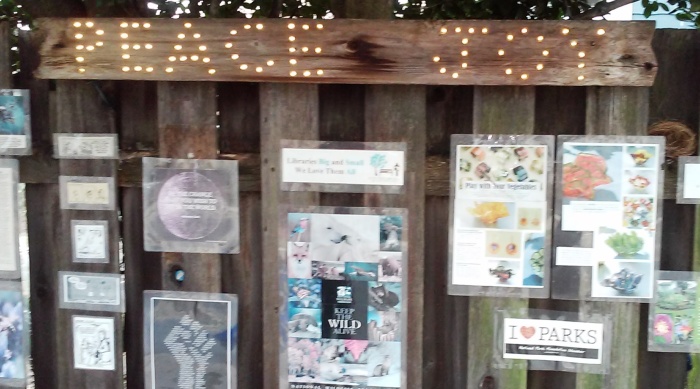 She maintains separate sections for children and for adults, changing poems based on holidays, seasons, or themes. The Presidential election and articles related to the current administration are there for reading pleasure or to provoke… Renee mentioned the fence postings are sometimes trashed. Poems, bumper-stickers or cartoons, especially related to politics or other contentious issues, have been ripped or torn down. What an interesting way to express disagreement–damaging someone’s private property.
But it brought to mind the Washington Post’s new tagline — “Democracy Dies in Darkness,” a phrase used by the newspaper’s owner Jeffrey Bezos, also owner of Amazon. As Bezos said in an interview:

“I think a lot of us believe this, that democracy dies in darkness, that certain institutions have a very important role in making sure that there is light.”

On a small scale, Renee brings light and cheer to her section of Del Ray: spreading kindness and literacy and  building community. Renee persists with her ministry, even in the face of occasional vandalism. She invites visitors to visit her Little Free Library and pause to read a poem. Find the fence at the corner of Windsor and Dewitt–it’s worth your while.
© Joan S Grey, 3 Mar 2017
IndexCardCure™: spreading light
http://www.indexcardcure.com
Renee emailed me some poems currently on her fence, such as the one below.

hands (a series of random thoughts on brown skin) by Joseph LMS GreenToday I am doused in guilt;
I don’t know what to do with these hands.
…
I am overwhelmed
by the irrational ranting
of a world too busy arguing
whether black lives are important enough to fight for
to actually fight for black lives.
And as I stand here…ranting,
I realize it’s because I don’t know
what to do with these hands.
That must hold and protect my son;
they are not bulletproof.
They are made of the same brown material
that have seen so many murdered.
But before I kneel
at the altar of suburban flight.

I realize,
somewhere, somebody is still crying.

Somewhere a black mother
is confiscating all the suspicious clothing her children own,
dressing the scarecrow in the front yard,
and burning our post-racial society in effigy.

Somewhere a young black college student
is being followed on suspicion of being
a young black.

I will not always be able to protect my son.
I pray that by then

At night,
when I take off my 3 year old son’s clothes,
I say “hands up henry.”
He thinks we are playing a game.